Fallen Angel 1×9: I think you knocked out a filling. 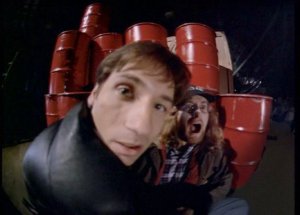 Even aliens dig the Magic Mirror.

We’re due for some little green men. “Space“(1×8) didn’t fit the standard alien profile and even if you count that, we just went 5 episodes without a UFO of any kind. How is this lack rectified? Mix a crashed UFO with an invisible alien until just combined, crack in a sad Scully then sprinkle Mulder in black jacket stealth mode and you have yourself a “Fallen Angel”. Oh, and serve on a platter of obligatory military stonewalling.

I was watching this episode for the fourth time when it occurred to me for the first time: it would be fun to be Max Fenig. I’d give up a lot for that trailer of his. Really, his character is like a prelude to The Lone Gunmen. I haven’t researched it, but I wonder if the success of this character led directly to their creation. If so, I wouldn’t be surprised. His character definitely steals the show this time around. Though the glory isn’t his alone…

Let’s just take a moment and give a round of applause for the enigmatic Agent Scully’s arrival. The lighting, the staging, the posing… I love it all. Her entrance? Fabulous. I can’t even begin to count the number of times Scully ends up having to bail Mulder out like this (though I’m sure someone else has) but she always does it. Admittedly, as the series progresses, she becomes less annoyed and more resigned. That’s part of the beauty of their relationship. It’s surprising how consistent their formula is even this early on in the series.

Not everything can be as consistent as these two are. One possible glitch in the great continuity continuum? The aliens aren’t evil. Or at least, their role is ambiguous enough that Mulder can dare defend them. This missing alien pilot only kills because our military is trying to hunt him down. Understandably, the mythology evolved over time and probably at this point in the series didn’t exist in any coherent form. Still, try as I might, my perspective is that of someone looking backwards, not someone watching for the first time. It can’t be helped. Some aspects of this episode don’t fit into the overall puzzle easily. The invisible alien abducts Max, so this is part of the larger conspiracy, right? Fast-forward to “Tempus Fugit” (4×17) and it feels like we have a completely different set of aliens doing to abducting. For instance, what happened to the scar behind the ear thread?

Here’s where I discuss the clear and present parallels to “Requiem” (7×22). Now, by no means is this blog spoiler free. I assume that if you’re reading my thoughts on an episode you’ve either already watched it or don’t care if you ruin it for yourself. But for the sake of those initiates who are merely watching Season 1 on their way to Season 7, I won’t mention just how similar these two episodes are. I’ll only say that some of the special effects echo each other and help serve to bracket the series. The similarities may even help thread together some of those jumps in continuity.

I’m going to share a dark and dirty little secret: mythology episodes sometimes bore me. (Insert collective gasp here.) Now, I’m not saying I don’t love the mythology, I just love the characters more and often “mythology” is code for “aimless shenanigans.” With that out of the bag, I freely admit that I never much liked “Fallen Angel”. I’ve always found it dull and somewhat aggravating, especially since despite Mulder’s emphatic assertions he knows absolutely bupkiss. Don’t tell him I said so, but Agent Mulder has a self-righteous streak.

Even so, fear not, I can joyfully say that I’ve changed my mind about “Fallen Angel” upon this last viewing. This episode is more subtle than I used to give it credit for. Max Fenig is quietly hilarious and the wordless exchanges between Mulder and Scully are priceless. Scully is frustrated with him in the beginning, suckered by his puppy dog eyes in the middle and sad for him by the end…. Which may just sum up the entire series.

Mulder knows that Scully pities him and I would say that this is a large part of the reason he responds to her character at all. He realizes that she does want him to succeed, if not because she herself believes, then because she’s one of the few people that sees anything good and worthwhile in Mulder. I would even say that he tolerates her sometimes ill-timed intrusions into his investigations because he knows she’s trying her best to keep him out of trouble. It takes her a while before she realizes he’s determined to go down in flames. Fortunately for both agents, he just misses that trip to hell this episode.

Why would Mulder use a state rental car?? Is he that cheap? Rent the car with your own money, man.

How does Mulder get away with half of the things he pulls? The forest is swarming with military, there are helicopters overhead, but watch him just scooch on past.

A shadow of continuity from The Jersey Devil? Mulder uses a professional camera.

The alien can pass through solid objects too? No wonder they had to reduce the abilities of the aliens in later episodes. No one could fight against them if they had more super powers than Superman.

Check Mulder’s embarrassed glance at Scully when his alter-ego is exposed.

6 responses to “Fallen Angel 1×9: I think you knocked out a filling.”