Fire 1×11: It’s a technique I refined in my relationship with you. 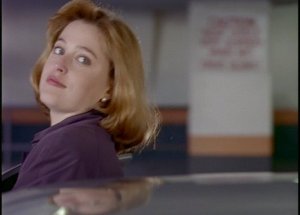 Me? Jealous? In your dreams.

And so, we come to “Fire”, a.k.a. When Mulder Lost His Mojo. What is it Scully writes about the arsonist? “He will often act out of impulse, satisfying sexual urges or insecurities with destructive behavior…” Who else does that remind us of?

Cecil L’Ively isn’t the only character starting fires in this episode. Phoebe Green is little more than his female counterpart, with the same sad lack of character exploration. We see a lot of Phoebe Green but we never see her in depth. She was originally supposed to be a recurring character and I suspect the lack of insight into her character is part of the reason she isn’t a successfully engaging presence in this episode. For an Inspector with Scotland Yard her skills as an investigator are strangely underutilized. Mulder and Scully do all the legwork.

She is naturally clever, though, and perceptive. For instance, she’s half right about Scully’s feelings toward her. Scully doesn’t hate her but she’s certainly not on Scully’s list of favorite people. That’s understandable considering that prank she pulls in the car. Phoebe nearly caused Scully to have a coronary merely to play sex games with Mulder. And Scully is nothing if not perceptive herself. She knows what Phoebe came for.

I’m going to walk the shipper plank here for a moment by saying that I don’t think Scully was jealous of Phoebe Green at all in this episode. Outside of the cassette tape incident, Scully comes off amused at rather than irritated with Mulder’s love life. She shows no signs of anger, hurt, or resentment. Impatience? Well, I’d be impatient too if my partner was making whoopee while I was trying to crack a case. Her reaction, however, remains professional and friendly. If she sometimes looks as though she feels she’s the third-wheel that’s only because she is. But, truthfully, Scully acted more jealous of Jerry in “Ghost in the Machine” (1×6) than she does of this leggy brunette.

I realize I’m most likely entirely alone in the fandom with this line of thought, but I just don’t see Scully pining after Mulder at this point. Not only that, but if Scully had a more selfish motive such as winning Mulder’s affections, the writers couldn’t have played her off against Phoebe in the way that they did. Just like Phoebe’s parallels with L’Ively, the differences between her character and Scully’s are pointedly marked out. Mulder notes it himself with that blink-and-you’ll-miss-it comment about not usually having his theories accepted so readily. Scully challenges Mulder intellectually, Phoebe sexually. Scully investigates the case to be a friend to Mulder while Phoebe brings this case to Mulder only as an excuse to seduce him. Scully comes to Mulder’s side when he’s at his worst, Phoebe ignores Mulder once he fails.

Scully doesn’t have an ulterior motive, her only intentions are to help Mulder and solve the case. This wouldn’t hold true unless she was not interested in him sexually. If we were unsure, there’s always that scene of black silk boxer shorts fame. Mulder doesn’t have to cover himself up until Phoebe walks in the room. Why? Scully isn’t a sexual threat. She’s certainly not out to make Mulder a conquest. Phoebe may be his lover, but Scully is his friend.

Is Mulder aware of the dynamics of the situation? Yes. There is a wonderfully classic Mulder and Scully interchange when Scully admits that she’s still been looking into the case, “For [her] own edification, of course.” Mulder’s slightly ironic nod of acknowledgment lets us know that he knows that she knows what everyone knows…

If later episodes make anything clear it’s that Mulder needs Scully and Scully enjoys being needed. She instinctively knows that Mulder needs her; we see it as early as “Squeeze” (1×2). This is why she doesn’t drop this case when Mulder lets her off the hook/gives himself a chance to mack on Phoebe.

Unlike Phoebe Green and even Diana Fowley later on, Scully has no ulterior motive. Her partner is in over his head emotionally and psychologically and she has to help him. She always has to help Mulder. It’s almost compulsive. Even in “Never Again” (4×13), when she’s in rebellion, she still does exactly what he asks her to do. (By way of an aside, as a general rule, the only time their relationship is ever in serious jeopardy is when Scully feels that Mulder might not need her or trust her, that he doesn’t really rely on her. See “Wetwired” (3×23), FTF, etc.)

It seems like Scully’s efforts throughout the series are focused on keeping Mulder just this side of sanity. She’ll yet at him if she has to, spy on him, investigate behind his back, whatever she has to do to make sure he’s OK. She remains ever aware that he’s a danger to himself.

After all, she’s right and he definitely needs her on this one. Now we know that the brilliant Agent Mulder can’t hold his own when it comes to women. He does indeed unfold before us like a flower. Next, it’ll be Scully’s turn in “Lazarus” (1×14).  Tit for tat and all that.

While this is another episode where the audience more or less knows the answer to the mystery ahead of time, it more or less works. Not, however, because of the plot, but because of the inter-personal dynamics. By George, we may actually be interested in these characters’ personal lives.

Originally, Mulder and Scully were supposed to have an exchange at the end of this episode that went like this:

I feel no hesitation in calling this cut one of Chris Carter’s best editing decisions. First of all, when did Mulder walk through fire for Scully in this episode? Secondly, the growth of their relationship is established without this pretty present wrapped in a red ribbon. After all, if Phoebe is an example of Mulder’s relationships with women, how could he not value Scully’s calm integrity? Moreover, the Ship, which was merely a canoe at this point, would’ve taken on water and sunk from an overabundance of syrupy goodness. No need to spell it out. Scully is Mulder’s Girl Friday. All is right with the world.

Mulder, Scully, and Phoebe all know Cecil L’Ively as “the driver.” Yet, once she takes the Marsdens back to their house, Phoebe (and Mulder too, for that matter) thinks that when Scully refers to “the driver” that she’s talking about the missing man and not Cecil L’Ively. Hmmm.

Is Cecil L’Ively a mutant or a magician? We can’t be sure. Maybe he’s like Clyde Bruckman and obsessed over fire to the point where he could start one. After all, he can only ignite the fire. He still needs an accelerant.

L’Ively lusts after the wives, he kills the husbands and then he leaves it at that? There’s no indication that he pursues the women afterward. I suppose it’s enough to get rid of the competition.

Phoebe and Mulder plan to run the trap all by themselves? I take it back up was overrated in the 90s. It’s not like the guy is dangerous or anything. And I don’t believe for one second she expected the arsonist to show. How would they catch him while kissing, with one eye open? The woman didn’t just book a room, she booked a suite for goodness’ sake.

Scully: Mulder, you just keep unfolding like a flower.

Scully: So, Sherlock, is the game afoot?
Mulder: I’m afraid so Watson.

8 responses to “Fire 1×11: It’s a technique I refined in my relationship with you.”