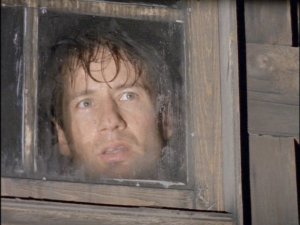 “Nisei” is about foreign scientists, war criminals, allied with the Federal Government and more specifically, The Syndicate, who experiment on unwitting citizens in an attempt to create an alien-human hybrid. If that sounds familiar, it should. It was the plot of “Paper Clip” (3×2). The main difference is that we’ve moved from talk of the Nazis to another World War II Axis power, Japan.

There are other repeats such as Mulder seeing what he thinks is a spaceship hidden from perfect view. That happened in both “Deep Throat” (1×1) and “Fallen Angel” (1×9). Scully has also confronted X over Mulder’s whereabouts before in “End Game” (2×17), but of course that time it was the other way around and she wanted to find him not keep his location a secret. And as I’ve already mentioned, as in the season opener the writers are using the horrors of history to scare us. What’s more frightening than the truth?

Since we’ve already heard this tale told in a different way, Chris Carter had to find a way to set this one a part and I think he successfully did that by tying in this set of experiments to Scully’s abduction in a more specific way: These Japanese scientists were the ones who performed tests on her when she was taken.

Now we know for sure that the chip found in the back of her neck during “The Blessing Way” (3×1) is connected to her abduction. If that weren’t enough, we find out that Scully wasn’t alone and we meet the other women who were there with her for at least part of her ordeal. Imagine walking into a room full of people who know all about you but you don’t know them. Talk about creepy.

Scully’s character certainly gets an uplift from the previous couple of episodes where she is relegated to the role of Debbie Downer. Here she’s still the skeptic but she’s a thoughtful one and gives this investigation the attention it deserves. It’s about time the question of why she still doesn’t believe is brought up as we’ve reached a point in the series where it makes less sense for Scully to even be a skeptic in the face of all she’s been exposed to. That’s why some of the previous episodes didn’t work as well as they might have because her knee-jerk skepticism seems out of place, as though she were just going out of her way to be difficult. The tantalizing teasing that goes on about the mystery of Scully’s abduction is a set up to explore her character further in future episodes. It pays off well.

The mythology keeps expanding to include more conspiracies within the conspiracy. It’s exciting and yet… this is both good and bad news. While the scope of the conspiracy is why it attracts an audience, it’s also part of its eventual, inevitable decline. You can only push the circle outward for so long before people forget the juicy center.

You’ll think me shallow, but what I love most about this episode is that it’s a party. So many honored guests are in attendance: Skinner, Mr. X, The Lone Gunmen, even Senator Matheson who is no doubt summoned because Skinner washes his hands clean of this situation. We also have a first-time participant in Agent Pendrell. We’re only missing Krycek who Chris Carter is saving for later in the season.

Mulder again proves there’s no length of crazy he won’t go to. He’s such a wonderfully frustrating hero. You want to punch him then hug him all in the span of two seconds. Scully’s parallel journey for the truth is just as compelling, but in a less action packed, more emotional sort of way. It’s fun to see them investigate on their own and then come back together and share notes, so to speak. Whether they’re communicating over the phone or in person they make such a great team. And the banter and humor sprinkled through this two-episode arc still makes me smile.

If “Paper Clip” was about the Germans, “Nisei” is all about the Japanese. It’s a natural progression to move on to the next Axis power. But whatever happened to the Italians? Not scary enough?

Why wasn’t Scully subjected to the hybridization tests that created mutants out of the others? Maybe that was reserved for the sick and they used healthy young women for another, equally sinister purpose…

We know Scully is going to get cancer, it’s only a matter of when. The question is, why does she end up with cancer relatively quickly when the other abductees took years and many abductions before they died? I would guess that the abductions themselves somehow saved them.

The Japanese “diplomat”, Kazuo Sakurai, doesn’t sound like a Japanese diplomat at all, judging by his speech patterns. He sounds more like a Yakuza gangster. I’m wondering if it’s an element of the plot that they didn’t have time to delve into, that he’s an agent of the conspiracy posing as a diplomat for nefarious purposes.

And then he knows Karate, because all Asians know some form of the Martial Arts. *Eyeroll*

Scully: That’s not your usual brand of entertainment. What is it?
Mulder: According to the magazine ad I answered, it’s an alien autopsy. Guaranteed authentic.
Scully: You spent money for this?
Mulder: $29.95… plus shipping.
Scully: Mulder, this is even hokier than the one they aired on the Fox network. You can’t even see what they’re operating on!
Mulder: But it does look authentic, I mean the settings, the procedures. I mean it does look as if an actual autopsy is being prepared, doesn’t it?
Scully: Well technically, I don’t know why they would be wearing gas masks.
Mulder: Well maybe it’s because of this green substance they seem to be extracting from the subject. Can you identify that?
Scully: Olive oil? Snake oil? I suppose you think it’s alien blood?
Mulder: It’s widely held that aliens don’t have blood, Scully.
Scully: I guess this begs the question, if this is an alien autopsy…
Mulder: …where’s the alien? But what so intriguing to me is the striking lack of detail here.
Scully: Well, what do you expect for $29.95?

Scully: I don’t know, Mulder, it just doesn’t track. What would a Japanese diplomat be doing in that house with a dead man with his head stuffed in a pillowcase?
Mulder: Obviously not strengthening international relations.
Scully: Well, what do you want to do now? Drop it?
Mulder: I’ve paid my $29.95, Scully. I think I’m entitled to a few more answers. Don’t you think so?

Mulder: Scully, after all you’ve seen. After all you’ve told me you’ve seen. A tunnel filled with medical files, the beings moving past you, the implant in your neck. Why do you refuse to believe?
Scully: Believing’s the easy part, Mulder. I just need more than you. I need proof.
Mulder: You think that believing is easy?