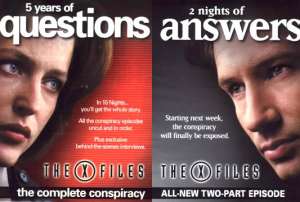 The truth will out.

I remember really, really enjoying this set of episodes the first time around. Probably because they handhold the audience all the way through the history of the mythology and I needed handholding. Unlike actress Aisha Tyler, I didn’t have a conspiracy flow chart above my television set to keep track of the goings on. An oversight I still regret.

The way the story is framed, with Cigarette-Smoking Man filling in the blanks through exposition, works quite well. Though the way the story was originally set up, told through a series of flashbacks, would have been even better. I’ve just read some of the original script that had to be scrapped because the flashback scenes shot with actors who… didn’t look like 1970s versions of themselves any longer, weren’t as effective as they needed to be. But if it could have played out they way it did on paper, it would have been awesome. Now my heart bleeds a little for the episode that could have been.

The thing is, “Two Fathers” lives or dies by exposition. So if you’re like me and you’ve been dying to know what exactly the mythology’s been about all these years, you’re probably a fan. If you’re among the faster minded, or the more diligently obsessed, there’s a good chance you aren’t hearing anything you didn’t already know and I could see how you might be bored. Me, even the things I’ve already figured out don’t bore me. I love that smug feeling of satisfaction confirmation gives you.

Interestingly enough, CSM isn’t the only one dropping knowledge. Cassandra Spender shows up again having ditched the wheelchair and gained its weight in factual information. Why was she able to pick up so much truth during this most recent abduction when for the past twenty something years the conspirators and/or the aliens had her head filled with lies? Now, not all of her information is accurate, but it’s a far sight more informed than what she so cheerfully preached in “Patient X” (5×13). Maybe her new status as a hybrid has opened up her understanding beyond the human.

Too bad her son is still in the dark. I may be the only one, but I feel bad for Agent Spender, so much so that I wish Mulder would go ahead and be nice to the guy. I mean, over the course of this episode he’s rejected by both parents. His father slaps him. Twice. And his mother comes back from the dead only to ask for Fox Mulder, his bitter rival.

While I doubt Mulder would ever see it this way, it’s partially his own fault that Spender has become the enemy. Maybe if Mulder had been a little nicer to him initially, or tried a little harder to avoid the misunderstanding and miscommunication that occurred between them, Spender wouldn’t have been as susceptible to his father’s machinations. Surely a large part of the initial appeal of doing CSM’s dirty work was the chance to take down Mulder, despite the fact that the glory of that is now wearing thin on Spender. It’s not like his newfound relationship with his father is built on sentiment. What’s love got to do with it? CSM doesn’t want a son, he wants a legacy; he wants to see his power continue on into the next generation. His nepotism in regards to Spender is purely selfish in motive but Spender is to naïve to realize that.

It doesn’t help that Krycek has been assigned to Spender as his sort of “big brother” in the Syndicate universe, showing him the ropes as it were. But Krycek wouldn’t be Krycek if he weren’t working toward his own agenda, which brings me to my next topic…

The eponymous two fathers are Cigarette-Smoking Man (aka C.G.B. Spender) and Bill Mulder. On the surface then, their sons, their competing legacies would be Jeffrey Spender and Fox Mulder. However, I believe there’s a third son here and that’s Alex Krycek, the virtual issue of CSM’s loins.

I’ve long thought of Krycek as CSM’s spiritual successor, and apparently that thought wasn’t lost on Krycek himself either. If you have the DVD, there’s a deleted scene you can watch were Krycek boldly comes to CSM requesting to be his heir apparent. CSM coldly tells him the position has already been filled. CSM’s rejection of Krycek and his resentment of it explains his later manipulation of Spender and his efforts to turn him against his father.

It also puts Krycek’s speech before the rest of the Syndicate into context. That overdone performance was for CSM’s sake, so that he could ingratiate himself. With that in mind, it makes more sense that he would abandon his previous position. Last we saw Krycek, he was for resistance, working secretly with Well-Manicured Man to enlist Mulder to their cause. Not that it’s hard to believe Krycek would suddenly turn without warning. He’ll do whatever he needs to in order to survive. That’s what makes him Kryeck.

Now, I realize that deleted scenes aren’t canon, but this subtext is present in this story arc with or without this scene. This moment just makes Krycek’s motivations clearer and so I’m sorry it had to be cut.

In a way, all three men are the sons of CSM. True, there are suspicions regarding whether or not CSM is Mulder’s father, but either way Mulder is the product of CSM’s schemes and manipulations, schemes that likely go back to Mulder’s introduction to the X-Files and his partnership with Diana Fowley.

Yes, the truth is out there now: Diana Fowley is in cahoots with CSM. The way that Carter and Spotnitz choose to reveal that truth is both startling and gratifying. I knew that woman wasn’t to be trusted! There’s just one huge problem left… how do we convince Mulder?

I don’t feel the same sense of urgency I did watching it way back when, but I still think “Two Fathers” works. Its only stumbling block is that it’s so much easier to entertain by raising answers than by providing them. Fortunately, I’ve been waiting so long for some clear answers and am so invested at this point that the satisfaction I get from hearing concrete facts is entertainment enough.

We’re a good ten minutes into the episode before Mulder and Scully even show up, but it’s well worth the wait. Perhaps feeling guilty over what they’re about to do to us Shippers in part two of this episode arc, Carter and Spotnitz write a classic scene of Mulder/Scully flirtation. Who knew such a short woman could walk into a room all made of legs? I may or may not have rewound this scene about ten times just now.

Yep, this is rewatchable television. Great performances all around and a hefty dose of payoff; I love that Chris Carter brings the train cars from “Nisei” (3×9) back. Bringing the story full circle by incorporating the past makes for an easily digestible meal.

Skinner’s a bit cold to Spender considering his mother, who he had given up for dead, has just been returned to him and he’s emotionally vulnerable. I know Spender hasn’t exactly endeared himself to Skinner, but still.

I never realized it before, but these two episodes are crucial for understanding how Krycek sees himself in future seasons.

Mulder just hacked into A.D. Kersh’s computer remotely in “Tithonus” (6×9). He couldn’t hack into Spender’s as well? He had to break into his office and risk getting caught?

All the crap Mulder’s pulled this season and walking into Spender’s office without permission is what gets him fired? As it is, the information he accessed on Spender’s computer was for a case Spender asked him to look into.

I didn’t realize Cassandra parted with Mulder and Scully on such affectionate terms. What’s with all the hugging?

Why would the Second Elder open the door for Openshaw after he knows Openshaw’s dead? Why make it easy for the Rebel to kill you?

Cigarette-Smoking Man: I’ve trusted no one. Treachery is the inevitable result of all affairs. Every man believes he has his own good reason.