Deadalive 8×15: Though he were dead, yet shall he live. 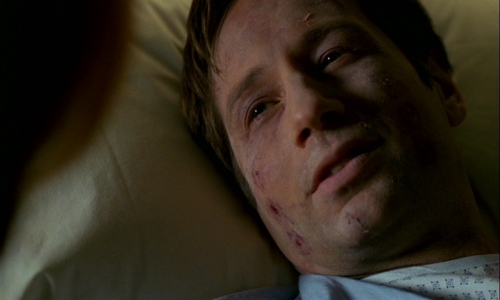 Merry Christmas to me!

I’ll tell you a secret. Scully is most people’s favorite… Well, Mulder was always my favorite and I’ve been slowly dying during his absence. Lo these many years and I’m starting to think I’ve been in love with the man this whole time. He infuriates me and I can’t live without him. I don’t know if that’s love but it’s close enough.

Scully: He was the last. His father and mother… his sister… all gone. I think the real tragedy, is that for all of his pain and searching,  the truth that he worked so hard to find was never truly revealed to him. [Crying] I can’t truly believe that I’m really standing here.

Skinner: I know. And I don’t truly believe that… Mulder’s the last.

So Skinner thinks Mulder knocked Scully up too, eh?

Well, if he did, it’s a good thing because it means he left Scully with a piece of himself. At least she has some comfort to show for all the time she’s spent on the X-Files, a time that looks like it’s coming to an end.

Deputy Director Kersh smells blood in the water. Mulder is dead and buried and has been for three months. Scully is about to go on maternity leave. And John Doggett was only ever on temporary assignment to the X-Files division. This is a perfect opportunity to close the X-Files for good. Skinner and Scully know it’s about to happen, but there’s nothing they can do to stop it.

Doggett is the one who won’t sit back and watch it happen. Though Doggett’s main impetus isn’t his personal investment in the work, but his emotional identification with Scully. He feels for her. He’s been there. He’s lost someone precious to him and he wants to support her through her grief. He wants to make sure the X-Files will be waiting for her when she gets back.

Kersh tempts Doggett to leave with a promotion… which is puzzling. I thought Kersh secretly didn’t want Doggett to find Mulder? That’s what we were told in “Without” (8×2). Now he’s commending him? He’s not upset that Doggett messed up his or someone else’s nefarious plans?

Perhaps there is no rhyme or reason other than this opportunity is meant to force Doggett to choose between a promising career at the F.B.I. and the trust he and Scully have built. Scully was ambitious once too, and more than once she’s chosen between her career and her personal involvement with the X-Files and with her partner. She can identify with Doggett as much as he can identify with her. But there’s a nagging niggle in the air that however much loyalty Doggett may show to Scully, their relationship will never develop to the degree that Mulder’s did with Scully and Doggett’s loyalty won’t pay off personally the way that Scully’s once did.

I kinda feel bad for Doggett, but then he tries to get in the way of Mulder’s resurrection and that is unacceptable behavior.

Because of course Mulder’s coming back to life! Even Chris Carter, sadist though he is, couldn’t be so cruel as to leave his beloved creation in the grave. Besides, Mulder still has to make an honest woman out of me.

Along with Mulder’s new lease on life there’s new life being breathed into the mythology. Krycek returns and there’s a new game afoot. These abductees are coming back to life for a reason, Krycek knows the reason, and for whatever reason, he’s out to prevent Scully’s baby from coming into the world. For that matter, I’m not convinced that Kryeck ever had a vaccine that would save Mulder. It seems more likely to me, and to Doggett, that the vaccine was a ploy to take out both Mulder and the baby with one stone. The vaccine he destroyed was likely either fake or poison.

Yes, Krycek’s motives are as obscured as ever. But it’s good to have him back. Though I’m afraid that as was the case with the recall of Jeremiah Smith in “This is Not Happening” (8×14), his primary purpose is to provide a link between the old mythology and the new and that he won’t be sticking around. Whatever these abductees are being resurrected for, that’s the future of the mythology.

I also don’t understand why this new virus is so easily combatted. When Mulder and Scully were up against the Black Oil, a sentient form of alien life that would infect its host and either control them or gestate into a mature alien, it couldn’t be treated by any old antivirals. A vaccine specifically designed to counter the virus was necessary and that was awfully hard to come by. After all Mulder’s been through, after all Scully’s been through to find him, bringing him back to normal was as easy as giving him antivirals that weren’t engineered to treat the virus he’s infected with? So this new invasion is treatable with human resources already at hand? Hmm…

All we really learn in this episode is that there is a new virus and it’s turning abductees left for dead into new versions of themselves. Their true nature and purpose remains to be seen. The truth is, considering “Deadalive” marks Mulder’s much anticipated return, I’m surprised we got any new information at all.

All right. Let me be really real. I usually only watch two scenes from this episode: the one where Scully sees Mulder again for the first time and the one where Mulder wakes up. Hidden deep within Season 8, a season many fans threw up their hands and gave up on, are two of the most beautiful moments in the history of The X-Files.

Watching Scully put her hand on Mulder’s chest and feel him breathe again for the first time is just… everything. If you’ve ever lost anyone you cared about then you realize what a dream come true this is. You can actually feel her joy.

And the second scene I almost can’t type about. The look Mulder gives her when he wakes up is almost too beautiful for me to stand. The love is palpable. Palpable. I don’t understand how David Duchovny and Gillian Anderson can act that well. They can’t. No one can. They must’ve been living it in the moment. Thank you for that, you two. Thank you.

Poor Doggett, though. He walks in at just the wrong moment and officially becomes the third wheel. The man just gave up his future at the F.B.I. and laid all his bets on the X-Files only to be immediately displaced and rendered superfluous.

Or is it Mulder my beloved who’s superfluous now?

P.S. Merry Christmas to all and to all a good night!!

“For unto you is born this day in the city of David a Saviour, which is Christ the Lord.” – Luke 2:11

Hold up. What is Kersh doing at Mulder’s funeral? Don’t pretend you cared.

Maggie Scully, though, it was good to see her. Too bad we didn’t get to hear her talk.

When she first arrives at the hospital, Scully walks toward Doggett with her hand on her belly like, “You can’t say ‘no’ to a pregnant woman, can you?”

Scully keeps snuggling up to his unconscious form but… Mulder must’ve smelled though, right?

Kersh tells Doggett to drop the case but he’s not really doing anything. Skinner and Scully are.

Krycek… you, sir, are every kind of name in the book. And don’t you touch Mulder’s nameplate! Unclean! Unclean!!

Why did they ever put Mulder and Billy Miles on life support if they were breathing on their own?

They wouldn’t have embalmed Mulder. There was no way there was ever going to be an open casket. Nope. Sorry. But one does have to wonder why the F.B.I. didn’t autopsy him. They would have wanted to confirm that he had similar injuries to the previous victim.

Kersh: It’s going to be awful crowded down in that X-Files office.

Scully: Agent Doggett, however I felt about you when we first met, you changed my opinion with the quality of your character and of your work. Now, I am thankful to know you and I am thankful for your concern. But no matter what Mulder’s chances are the choice not to open up that grave was wrong. And not because of me personally but as my partner on the X-Files. Now, the truth may hurt but it’s all that matters.

Betcha thought I was going to transcribe Mulder and Scully’s reunion. Well, I’m not. Watch it. The dialogue is dead without the delivery.

This entry was posted in Uncategorized and tagged Deadalive, Doggett, Krycek, Mulder, Scully, The X-Files, This is Not Happening, Without. Bookmark the permalink.