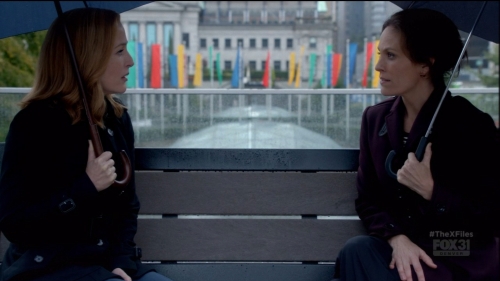 The (un)emotional reunion we’d all been waiting for.

I do understand, Chris. I want to forget about the Super Soldiers too.

It seems that in order to facilitate said forgetfulness, we’re going to take it back… alllll the way back to the perverse politics of “Paper Clip” (3×2) and the Hitler-esque horrors of “Herrenvolk” (4×1).

Ah, yes. Hitler. I’d been wondering since “My Struggle” (10×1) what the connection would be between the hijacked title of Hitler’s defining autobiography (“Mein Kampf” in German) and this new era of conspiracy on The X-Files. It would seem that old is new again, and Chris Carter is reeling back in the real world fear of eugenics and calculated experimentation by humans on humans, humans unfettered by morality and governed by nothing but humanism and ambition. (Maybe he should have named this two-parter “Babylon” and “Babylon II”?)

We’ve eschewed the supernatural for a super human evil: Heil Cigarette-Smoking Man, the new Hitler, who is almost single-handedly punishing mankind for its failure as a species — or for his own failure to bring about Colonization, take your pick as to which — and is ready to to wipe out humanity as we knew it and repopulate the planet with the Ubermensch: the human species upgraded with alien DNA. If Mulder would just cooperate, together he, Daddy Dearest, Scully and William could become the new master race, the Herrenvolk.

What the heck now??? Monica Reyes as the new Diana Fowley? Stah-ap!!

What’s most insulting to the character is that she’s so easily manipulated by CSM with nothing but the vague threat of impending doom. She already knew there was a battle for humanity; that’s why she helped Mulder and Scully escape in “The Truth” (19/21). What kind of science could have proven to someone who was not at all a scientist that hope was hopeless? How did she explain herself to John Doggett?? And you’re telling me he was willing to save her life purely in exchange for lighting his smokes???

I’m so done with this desperate attention seeker of a plotline. Moving on.

Scully: The technology wasn’t there, Mulder. DNA wasn’t even identified until 1944. This is all a lie! – “Paper Clip”

Scully’s doubts reflected my own for much of this episode. How could CSM & Co. have been manipulating human DNA through the Smallpox vaccine when we hadn’t yet mapped the human genome? Well, kudos to Chris Carter for harkening back to what he established way back in Season 3, that the government had long been keeping its scientific knowledge from the public.

But I’m going to have to dock a few kudos for not keeping more of this scientific knowledge from the public. “My Struggle II” is 90% science and 10% story. If in order to pull off the plot the science is so complicated that you have to take your audience back to school for half an hour for them to understand it, it’s too complicated. Leave it out. Way too much time is spent listening to Scully and Einstein explain things to each other that doctors would never have to explain to each other. What’s more, as always, Scully has special knowledge far beyond her speciality. But I suppose I’m used to that by now.

I’m also used to William being treated like a prop. Yet it would seem that if we do get a Season 11, FINALLY, the hunt for William will become paramount. That’s all I ever wanted and it was not too much to ask.

The ending leaves much to be desired. The episode leaves much, much to be desired – less exposition, some, any, a crumb of Mulder and Scully would have sufficed. The whole point of this revival was to put the team back together. I didn’t campaign like a house-bound otaku for Miller and Einstein.

Let me tell you about my struggle. It’s the struggle of a teenybopper fangirl who desperately wants to believe in her first love with the enigmatic skeptic inside. If The X-Files keeps going, will it get better or will it get worse? Are we apexing toward another Season 5 or are we snowballing toward more of Season 9?

I’m betwixt and between. And “My Struggle II” leaves me feeling little more than apathetic.

Though at last, AT LAST we’re seeing something akin to an apocalypse. Colonization has been threatened for so long without any significant movement in that direction. True, this large scale immunological breakdown is the machination of man, not of aliens… or is it? Chris Carter giveth and Chris Carter taketh away; he’s wont to take back a plot he’s discredited only to discredit it again. We might find that CSM put this current drama into motion in 2012 for a reason.

There may be a master plan here, but even if I make sense of it I’m not sure it will be satisfying. The ending left me with neither a sense of completion or anticipation. I get both out of “Requiem” (7×22) and even “The Truth”. “Existence” (8×21) has its faults, but at least the characters’ story arcs are made whole. “My Struggle II” ends with a pure cliffhanger, but not the kind of cliffhanger that makes you pick up the phone and call your mother screaming. The characters haven’t evolved and they’re not in any sort of emotional crisis. Mulder’s sick, but he’ll be healed. Scully’s likely been abducted… again… but she’ll be back. Then what? More giant jumps of assumption from our level-headed scientist? More mini Moose and Squirrel? More Truth Squad?

Musings of a Madwoman:

If I’m reading this right, CSM is behind the murder of Sveta and the abduction of Scully, the first to keep her quiet and the second to keep her from saving lives.

Seeing Well-Manicured Man and Krycek in the teaser made me all kinds of nostalgic. That helped propel my “Paper Clip” and “Herrenvolk” rewatches, which in turn were the best parts of watching and rewatching “My Struggle II”.

Mulder’s beat up and Scully doesn’t know where he is. It’s like old times.

Speaking of beat up, the fight scene was a little long, but it was bomb.

Scully looks the best she has the whole revival.

Scully wouldn’t have had room to weave through traffic like that if the world was in a real panic.

That’s it, huh? Scully gets abducted… again? Time for another ride on the abduction merry-go-round? How about taking Skinner next time, hmm? I guess he’s overdue for a turn.

I could have sworn that somewhere in the previews for the revival I saw a glimpse of the old warehouse used to store vaccination records in “Paper Clip”, but then it never materialized. Or did I just imagine it? It would have made perfect sense with the plot.

What about the people who either somehow avoided or missed the vaccine, or those who came to the country after the vaccine? They wouldn’t be affected and neither would their children.

Mulder, the Patriarch of Paranoia, has a GPS tracker on his phone? But really now?

There are times when the awkwardly formal dialogue of The X-Files can be endearing. This was not one of those times.

This entry was posted in Uncategorized and tagged Babylon, Chris Carter, Existence, Herrenvolk, Mulder, My Struggle, My Struggle II, Paper Clip, Requiem, Scully, The Truth, The X-Files. Bookmark the permalink.