My Struggle III 11×1: Who or what had reason to put her through the trauma? 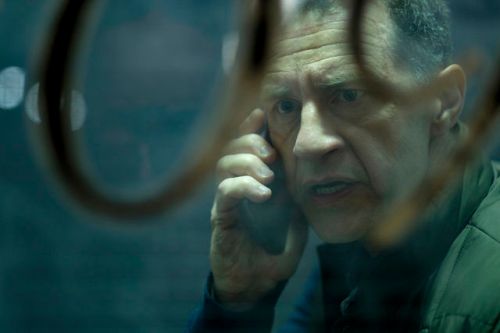 Well, I honestly didn’t see that coming. And I wasn’t overly fond of it going. The entire season finale was fake, a mere premonition in Scully’s head. The long-promised apocalypse is not upon us. Thank you. Thank you, Chris Carter.

You see this picture of Scully, my fellow Philes? 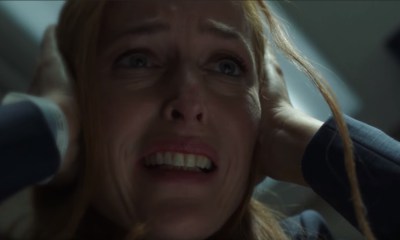 This was me watching “My Struggle III”. Gillian Anderson was mocking me.

Before I start ranting for real, let me take a moment to focus on the positives (I bet you thought there weren’t any).

Mulder felt like Mulder… sometimes. His famously irrational, knee-jerk anger, so often on display and misplaced toward Skinner whenever Scully winds up in the hospital, felt a little forced. He was missing some genuine intensity. Remember “One Breath” (2×8) or “Redux II” (5×3)? THAT was Mulder on the verge of a breakdown at the thought of losing Scully. I’ll take him slitting the throat of anybody who touches her, though.

In less ambiguously better news, Mulder upgraded from that Oldsmobile Intrigue to a Mustang.

Now, let’s talk about why I have a headache this morning.

For the love of the Lone Gunmen, did Chris Carter just insinuate to me that Scully may have given birth to Mulder’s brother?

I want to complain about Reyes’ characterization, about Skinner’s character reversal and that, after all this time, they want to turn him back into an is-he-isn’t-he character, about William not having Scully’s coloring like Mulder said he did in “Existence” (8×21) (even though I personally always wanted him to look like Mulder), about the borderline Biblical, nay, Shakespearean dialogue that was easier to forgive in smaller doses in earlier seasons when we were invested enough in the overall story to benevolently ignore it (SO. MUCH. TALKING.)… buuuuuuut I can’t. Because Chris Carter just said to me that Carl Gerhard Busch (CSM to those in the know) made a baby with Scully.

He said CSM made a baby with Scully.

If I sound like a broken record, it’s because my brain seems incapable of moving past this point.

Of all the disgusting, stomach-turning, hurl-inducing retcon crap. You’re gonna dig into the archives, after blatantly ignoring and shedding the series canon because you couldn’t keep track of it yourself, to find a long forgotten (if admittedly underappreciated) episode buried in the doldrums that was Season 7, a season most people didn’t much watch, and bubble back up to the surface with this pile of manure? Really?

You’re in love with her.

If 1013 Productions is going all the way back to “En Ami” (7×15) to find inspiration for their new direction, their compass is broken.

I’m not having it. I’m ignoring it. LALALALALALA! I can’t hear you!

And yeah, I am a grown woman.

I’m so fed up, I can’t even get excited about Spender being back, or the fact that he has a face. I’d be happy to see him if I were happy.

But I’m beyond disappointed, I’m disgusted that 1013 still hasn’t learned from Seasons 8 and 9. It wasn’t the audience, it was you: The question of William’s paternity is not interesting. They still haven’t gotten the message that no one wants to see that? No one wants to ride the yo-yo of is he Mulder’s, isn’t he Mulder’s? Ridiculous.

It’s even more ridiculous than Chris Carter’s signature purple prose here. Now, you all know I tend to take it easy on Chris. I can even hear some of those stilted speeches with a little bit of affection. But it was an entire hour of awkward exposition that didn’t even feel true to the characters. That was Chris Carter talking. Chris Carter talking and venting about the modern world, it’s people, and politics. We’re supposed to believe “Jagoff Shoeshine Tip” Mulder talks to himself like that in the car? At first, I was feeling a little nostalgic about it a la “Colony” (2×16) and “End Game” (2×17), but then it kept going like the Energizer Bunny.

And could the Einstein and Miller doppelgangers be any more useless? You don’t think so either?

The aliens aren’t coming, Mr. Mulder. Just so you understand.

Why does Chris Carter seem to think he can recapture the magic by reversing everything and then rehashing people and plots x2?

Really, though. Those bedside scenes between Mulder and Scully were lacking some punch.

Scully’s spitting out Morse Code from her brain? I’m all for Scully having her turn at heightened brain activity. After all, Mulder read minds in the “Biogenesis” (6×22) trilogy. But this seems a little… comical.

Mulder: The thought is imperishable. (Well, if the thought won’t die, then kill me.)

CSM has become way too godlike for the plot’s own good. I remember when he was relatively low on the Syndicate totem pole.

Scully despised Spender at the end of “William” (9×17) after he pretended to be Mulder and cured William of his superpowers (That didn’t take.). Even if she agreed with him that William was in danger, she believed he was in danger from people like Spender. Why would she let him arrange William’s adoption? Why would she trust him to be the only soul on earth to know where her son was?

Scully: You need him. And I need you.

77 responses to “My Struggle III 11×1: Who or what had reason to put her through the trauma?”